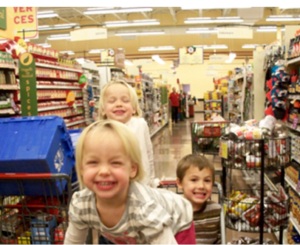 Sometimes, I get the question, “so, why are you doing this yoga thing now?” It makes me laugh. I won’t go into the threads of yoga in my life and when they began and what they became at different times for me. Right now, yoga is becoming part of my publishing company’s journey, too. And, it’s fitting. Not only do I practice yoga, but so does Melissa Corliss DeLorenzo, one of the authors published by Thorncraft. In fact, Melissa wrote a blog in 2010 about how her children busted out their yoga moves in the grocery store for a public display of asana. While this blog is centered on NaNoWriMo (National Novel Writing Month), it’s the humor and overall zen quality of Melissa’s approach to mothering and accomplishing goals that captivated me (& caused me to laugh until I snorted). She has allowed me to publish it again here on my blog in a series about yoga and what we are working on for the future. Stay tuned and enjoy this hilarious story that most all mothers can relate to:

Grocery Zen with Children…yeah, right
By Melissa Corliss DeLorenzo
You know what’s one of my biggest challenges with NaNoWriMo? Finding time to go to the grocery store for the weekly shopping.   I remember when I was lying on the sonographer’s table and saw my twins in utero for the first time (BIG surprise), one of my first thoughts was how am I going to grocery shop with three little kids? But I figured it out: one baby in the car seat in the cart itself (yes, groceries piled around her), one in the baby carrier, my (then) two year old in the kiddy seat. As time went on, it morphed into one twin in the kiddy seat, the other in the carrier on my back and my little boy on foot. This arrangement worked beautifully for a long time.   Until recently.   The girls have decided they want to be neither on my back nor in the kiddy seat. So, I decided, fine, you can both go in the cart itself which prompted this facebook post once we returned home: Yes, I was THAT mother in the grocery store and my kids were THOSE kids. Everyone was probably relieved to see the extra big bottle of wine in the cart…   They have grown to be completely nuts in the grocery store. It used to be a piece of cake, but no more. Ella asked me recently if we were going grocery shopping. And I said, “I don’t think so, sweetie. Do you know why?” She said, “Cuz Ella and Lily don’t listen.” She’s right—they open packages of grape tomatoes in the aisles, they stomp on bags of flour, they toss things out of the cart, they pull labels off cans. And they think it is all hilarious. They yell as loud as possible and crack each other up. They try to jump out, too. And every shopper who walks by freaks out that they are imminently going to fall. I can sense them questioning my mothering skills. Something about the grocery store brings out the evil in my daughters. I’m sure everyone else thinks it’s quite comical, but I am the nut saying things like, “If you don’t stop crushing our food, you are going to lose the privilege of grocery shopping with Mommy!” While I am saying these crazy things, they are singing Ironman at the top of their lungs. (Thanks to husband for introducing Black Sabbath to my precious children…)

So, here’s the thing: I go out on Thursday nights alone. I go and write. There are times when I go and read or stare at nothing. I just like being alone while drinking my nice little latte without anyone touching me. Once, my husband jokingly said on my Thursday night, “You look nice,” (which meant, I think, oh you showered). “You going to meet some guy?” And I said, “No. The last thing I want is someone touching me or trying to talk to me.” This was when we were in the thick of two babies and a toddler, when the best personality trait a person could possess was the ability to hold it together when presented a broken cracker.   So, ever the optimist, and attempting to preserve the sanctity of my Thursday night writing time, I decided to try shopping with them again. This was the next facebook post:Remember that time I said I would never go grocery shopping with the kids again? Well, I mean it this time.

Getting to the point, I started using part of my Thursday nights to grocery shop, sans kids. But it’s NaNo time now and I cannot afford to utilize any of my precious Thursday nights for anything but writing. (See? This does have something to do with writing!) I was more determined than ever to make our grocery shopping together work. Damn it.

My new tactic: two carts! One for the kids, one for the food.

Here is the one with the food—peaceful and tranquil:  (You can imagine it with produce)
You saw the photo of the kids at the top of the page. That photo documents a semi-good moment in the shopping experience. Soon after, they were dumping water on the floor and doing Downward Facing Dog from the top of one side of the cart to the top of the other. All while chanting the words to “Five Little Monkeys” as loudly as possible. Then they commenced to freak out at the check-out when they realized that it was logistically impossible for them to place (throw) the food onto the belt from their cart. I defied the laws of physics and figured it out. I’m sure someone from MIT will be contacting me.

Long story short, I really mean it this time. But not on Thursday nights. I gotta write.

(Someone know a way to stretch the week one little hour longer?)

I still managed to stay mostly on track this week. A little behind but I will catch up this weekend!
How’s your NaNo project going?