Words lead to not only more words, if you keep writing, they also create paths and spaces. I didn’t believe the land of words could be so much like trail running when I convinced myself to make words the focus of my career. I had to be careful, to share the trail with my authors, to know when to go it alone, to understand how to step back and “rehydrate” my author’s brain while being a publisher who represents other authors, and most enchanting, to discover new beauties and struggles on the writer’s path just as I discover them on the running trails.

I started a blog way back in 2005 with Yahoo360. It was like a couch-to-5K for my writing life which had soured into a ritual of grading English Comp papers and writing way too much feedback to the students. At first, like trail running, blogging hurt and I was getting about one hit an hour. How could this go anywhere? My forehead rested on the desk. I stumbled through writing about pregnancy and staying on target with one blog post a week. I was passed by professionals, out of my league. Winded and exhausted after those first attempts, I got wise and followed the people in social media to the MySpace blog world, and led a happy blogging life at blogspot, too. After a short time, I was content with these familiar trails, and I knew people on them, and it didn’t hurt so much anymore to expose myself as a writer. I blogged about motherhood and students in my classes. This was not nearly enough, even with thousands of hits. I yearned to write something more. It was time to add distance and a faster pace to my writing life. Through social media, I found Her Circle Ezine, and eventually became the Editor-in-Chief, wrote my own novel in the meantime, & tried to shop it.

The run was going strong and even getting hot, and my writing revealed more, new adventures. I helped with The Institute of Arts and Social Engagement with Misty Ericson, wrote articles about Mexican women for Lake Chapala Review magazine, interviewed bands & musicians for a Nashville music magazine, felt inspired to create books by women, and took odd writing jobs. Sometimes, I felt smothered by the trail. I couldn’t see my way out of it to the next place. There were traditional maps, but they weren’t working for me. I was in an endless loop. So, out of frustration, I started Thorncraft Publishing to publish my own novel, and then people joined me. I read Beverly Fisher’s novel, decided to publish another author, loved Melissa Corliss DeLorenzo’s work, jumped at the chance to publish her work too, and life kept going. The vistas open up sometimes, and allow more space. The trick is to keep going through the stumbles, brambles, heat, and more, until you reach new paths. Now, we’ve trained up for “ultras,” and in the running world this means 30+ miles per run. In our world of words, this means multiple books published every year, a literary magazine, a stage play, and more. 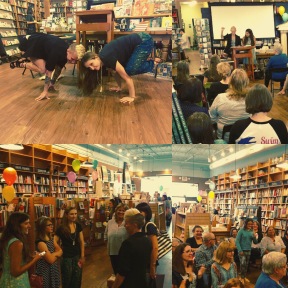 What’s happening now:
We have a new author at Thorncraft, Salty Teague. She and I wrote a book together earlier this year and launched it at Parnassus Books in Nashville. Seasons of Balance: On Creativity & Mindfulness is a self-help creativity journal, with poetry and stories thrown in the mix with affirmations and meditations. The book was chosen as a regional Wounded Warrior Project book, and Salty and I spent a beautiful afternoon at an event at The Yoga Mat that honored caregivers of Wounded Warriors.

The literary yoga journal, BreatheYourOMBalance Volume One will be finished later this year. Our open reading period was a success. Salty chose 28 contributors for the first volume of BreatheYourOMBalance: Writings about Yoga by Women (Forthcoming, Fall 2016). The contributors range from homeschooling moms to nurses, from yoga teachers to yoga beginners, from university professors to students. We are featuring the contributors on the Thorncraft website, so that you can read about them individually.

Salty and I continued working with everyone at The Yoga Mat by having writing workshops. Our next one will be Sunday, October 9. We are excited to partner with The Yoga Mat for Volume Two of BreatheYourOMBalance, which will focus on yoga and healing. Volume two will not be published until 2018.

Salty and I were promptly inspired to get going on a children’s book together. We’ve been planning it since last fall. You’re going to love the adventures of Luna the dog and Salty the raccoon. Forthcoming, 2017.

In 2015, Grace Among the Leavings by Beverly Fisher was adapted for the stage by Kari Catton and Dennis Darling, and performed at New Salem’s Theatre in the Park in Illinois. It was further adapted into a one act play by John McDonald, and performed in June 2016 at the Roxy Regional Theatre. We have more plans for “Grace” on stage in the future.

Melissa Corliss DeLorenzo is working on a new novel, but no word yet on what it’s about. She’s back on the blog, usually writing every week. She has several events this fall in Massachusetts, including the New Bedford Book Festival.

Check our Events page at thorncraftpublishing.com to stay up to date. The publishing website is updated weekly with the newest announcement and events.

2 thoughts on “The Trail of Words: Running Words from 5K to Ultra”