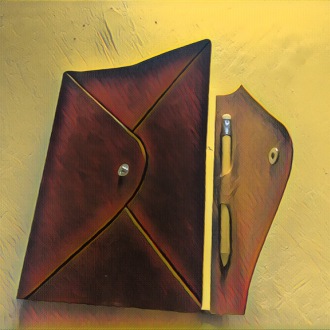 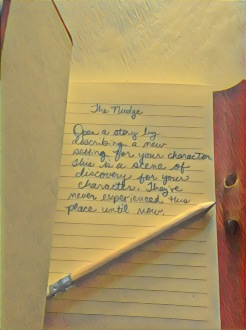 Writing prompts have always compelled me to simply write, especially if they push me into a creative thought that I wouldn’t have considered as a starting point for a story and/or a new surprising slant that I can use within a working story. Sometimes, a writing prompt isn’t packed full of profound information, but it’s more about the timing being in sync with your story dilemma. A writing prompt can create one of those sudden moments of knowing after being blank.

Week 5, January 2017. Theme: NERVOUS HABIT. Create a nervous habit for one of your characters. If not the main character, choose a minor character who needs more description in order to come alive in the story. This habit could add an element of humor and/or realism to your story. The habit could be a sound they make, an action toward themselves or others, or an inability to act. The habit could create a central conflict for the character (consider habits such as cutting, binge eating, and other forms of serious, repetitive self-harming). Likewise, the habit could be more of a side-note, something endearing and entertaining without being central to the conflict. Adding a habit could show more depth to a character or to the overall story.

I give the writing nudge to those who need an extra elbow or two, and I’m sharing one of my prompt journals throughout this year on the Thorncraft website. You’ll find a new writing prompt every week, sometimes in the wee hours of the morning for all the midnight writers out there.

Writers, Week 11 of The Nudge is here, and we’re thinking about the foundations of mobility. Write On…Theme: BASIC MOBILITY. How do your characters stand? How do they walk? Are they incapable of walking/running/jumping for some reason? What does their stride look like if they run? Do they have a particular stance and is it altered when they are nervous or lack confidence? What kind of shoes do they wear? Experiment with basic mobility in your story. Find more suggestions related to creative nonfiction and poetry about this prompt on our home page. All photos & prompts by Shana Thornton.

The current Nudge is on the Home page http://www.thorncraftpublishing.com and we’re up to Week 16 this week.

Check out some of the prompts from past weeks here (Weeks 1-9): http://www.thorncraftpublishing.com/the-nudge.html
On the website, prompts include suggestions for fiction, creative nonfiction, and poetry. 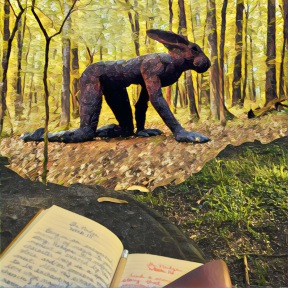 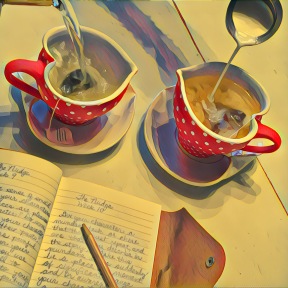 Throughout this blog, I’ve given a few examples and the photos that accompany them. Some weeks, taking the photos inspires me as much as the ideas behind the prompts.

I started writing the writing prompts themselves when I wanted to encourage my students to write and so I developed prompts beyond the ordinary journal topics given in most composition courses. I wanted to stimulate style and storytelling, and simultaneously I started to manage an online weekly writing prompt with another author/editor. Suddenly, a series of writing prompts would sweep over me while I was making dinner and running in the forest, or whatever else I might be doing. The prompt process became part of my own inspiration for my novels and short stories. Each prompt became a nudge that shouted, “Go! Write about this if you can’t think of anything else. Go on, do it!”

This is part three of a series on letter-writing in fiction.

Secret letters can create many routes in a novel, and they offer the ultimate versatility to your story. These secret letters that suddenly appear in a book, they allow some of the deepest twists possible in storytelling. The story becomes the owl with its head turned all the way around, and you might even be able to stand the plot on its head at the same time.

I’ve noticed that the novels with secret letters don’t set out to be epistolary. Those secret letters are not referenced in the beginning of the book. The narrator never alludes to letters or secrets in that way. Then, the secret letters surprise everyone by showing up like a poof of dusty magic.

You can make it subtle, while retaining the lucidity of the scene and the significance of that moment in the storyline. In Multiple Exposure, Ellen Masters is legally adopted by her grandmother and grows up with a distant relationship to her mother. When her mother comes for a rare visit to see Ellen graduate from high school, Ellen’s mother finds all of the letters with money still stuffed inside that she and Ellen’s stepfather mailed to Ellen over the years. Prior to this scene, the narrator, Ellen, has never let the reader know that her mother and stepfather mailed letters and money to her. It should come as a bit of a shocking revelation on the part of the narrator to the reader for many reasons. The scene shifts again quickly, and this serves as a striking memory flash. Those letters are never mentioned again in the book, and there’s no reason to do so, as they served their purpose in the story.

You can make secret letters have a generational impact by revealing an even bigger secret decades later. In my second novel, Poke Sallet Queen & the Family Medicine Wheel, I used the idea of secret letters again, and they lead to the revelation of a secret that changes the family structure (for this blog, I won’t spoil the story and reveal that here). These letters are about the history of the Ballard family and are never seen by the narrator, Robin Ballard. She hears the story of the secret love letters from her Great Aunt Cora, whose heart is broken as a young woman by not receiving anymore letters from her secret lover. She tells her great niece about it decades later: “I don’t think my heart stopped hoping I’d open the mailbox and find my name written by his hand until I finally married someone else and moved away from there. It was like the mailbox could never be the same again.” For Cora, the letters are painful, but for her great niece, Robin, they are a revelation.

To read more about Multiple Exposure, my
first novel about narrator Ellen Masters who is trying to raise her daughter, hold down a career and home, all while facing the fears that surface due to her husband’s deployments to Afghanistan and Iraq and a shocking murder that takes place close to her home, visit thorncraftpublishing.com

You’ll also find more information about my second novel, Poke Sallet Queen and the Family Medicine Wheel, which follows the generational stories of a middle Tennessee family and the various talents of the Ballard family, from shaman, to moonshiner, to singer, and more.

Parts One and two in this series are about the confessional letter and passing notes in high school, respectively.

Copyright: All banner photos on this blog are by Shana Thornton.

Read my features, author interviews, and more at Her Circle Ezine
Loading Comments...